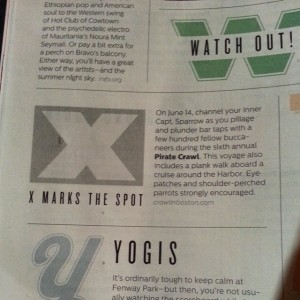 It’s always awesome running into a write up about Crawl In Boston that I had no idea coming. That’s what happened today as we were mentioned in the latest issue of the Improper Bostonian. We are very honored to be part of the Primed of Summer – An A-Z Guide to Alfresco Adventures.

June is this Sunday. I’m so looking foward to summer.

The Pirate Crawl takes place on June 14th. Tickets for this are on sale now. We’ve already sold more than our largest past crawl. This will be our biggest and best yet!

Alpha In Boston is our alphabet based happy hour / bar crawl. More info here on that. Tonight we head to Merrill & Co.

And Red, White and Brew is on July 12th. Tickets starting at only $13. We have a handful left at that price. Ticket includes $3 or less drink specials at all the bars, USA Stovepipe Hat, Aviator Sunglasses, USA Flag Pin, Koozie and Photo Backdrop by Crawl In Boston and Barney Fanning’s