Koy is the latest tenant of the oft-overturned space at 16 North Street, across from Fanueil Hall.  They bill themselves as

a Korean fusion place with old-world Korean classics as well as new takes on those classic flavors.  It does so quite successfully, and I hope this place sticks around.

The space itself is colorful and fun.  There’s a decent sized bar and plenty of seating with both tables and booths.  The drinks are fun and well crafted.  I am a sucker for a spicy drink and the El Pazzo hit all the right notes: heat from the Thai chili pepper infused tequila, with passion fruit and lime perfectly balancing it out.  The Soju Sangria was a fun take on the classic, with flavors like lychee and aloe adding new dimensions on the apple and orange standard.

The menu is broken down into small plates, traditional food, and “twists”.  We tried the cheese steak dumpling with were a very fun play on both a dumpling and a cheese steak, with kimchi, pastrami, and Swiss cheese.  It was extremely flavorful.  The Master Chang chicken is Koy’s take on the classic General Gao, with a crunchy exterior and a juicy inside  The sauce is slightly sweet, slightly hot (it can be ordered extra spicy as well) and overall addicting. When ordered at lunch time, it comes as a special with salad and fried rice.  From the twists menu, we ordered the Drunken Chicken Sandwich, which came with a Korean spice marinae, peppers and onions and fries on the side.  It was well cooked and tasty.  Other menu items include classic bulgogi, hot stone bibimbap, and a kimchi burger.

The staff has always been friendly and attentive.  The food is well cooked and presented, and it is reasonably priced–entrees run generally from high teens to twenties for dinner, with lunch specials from 11-3.

Michael Serpa, formerly chef at Neptune, opened his own venture, Select Oyster Bar, in the Back Bay.  The space is 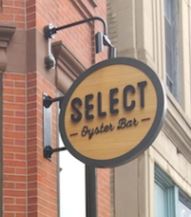 small but cozy, with a fantastic back patio that felt festive and fun to our large group. On that note, they only accept reservations for groups of 8 or more, so if you’re dining with less than that, get there early or be prepared to wait.

Mixed drinks were well crafted, and the beer and wine selection was quite good.  Service was attentive, with Chef Serpa himself often appearing at the table to put down plates or pour wine.

The food was simply phenomenal.  We started with a seafood tower, adding on some oysters.  Everything was experly shucked and prepared.  A standout appetizer was the octopus.  Even the less adventourous diners in our group tried and fell in love with it.  Very tender and flavorful, it was a highlight of the meal.  Entrees were well received.  The roasted lobster was very well prepared, the arctic char was perfectly cooked, and the whole roasted sea bream was beautifully presented before it quickly disappeared.

This wasn’t a particularly thrifty meal, but it was worth every penny.  One thing to note is that they add an automatic 20% gratiuity to the check.  We would have expected this anyway with a group of 8, but is something to note if you’re dining with fewer.  It is clearly stated on the menu, and this doesn’t particularly bother me, but it seems to rub some people the wrong way.  For such fantastic food and pleasant atmosphere, it’s worth it.

This entry was posted in Uncategorized.