We’re introducing a new feature on the website.  We’ll use the Monday Morning Hangover to 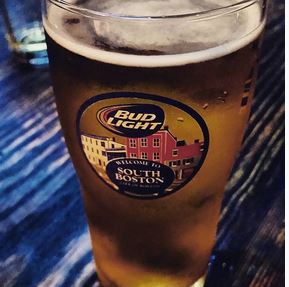 Coppersmith is a cavernous space in Southie, filled with brick, wood….and food trucks?  There isn’t anything quite like it in Southie, or in the area in general.  It’s a fine addition to the neighborhood, with an interesting and different concept.
This space is BIG, making it a good place to meet a group.  There are two floors, multiple bars, and an outdoor patio, and the aforementioned food trucks.  On the day we were there, Blue Point Brewery was hosting an event with free beer samples, free food, and games to win prizes. We saw that earlier Michael Serpa of Select had been giving a cooking demonstration.  I’m not sure if they will be doing those sorts of things regularly or it was just for the opening weekend, but things like that are always fun, and provide something different to do on a weekend.   We got there around 2 with the intention of grabbing lunch, but we learned they weren’t serving their regular menu until later, instead they were just serving food from the food trucks. However, we were given a voucher good for one food truck item from the brewery, so we sampled some of the offerings and decided to wait until 5 when their dinner menu started.  The items from the food truck we tried were all tasty: a gooey grilled cheese, a savory and rich chicken and biscuits, and a decadent Nutella stuffed French toast.
We were there on the second day it was open, so there were some understandable opening related mishaps/confusion, but the staff was generally nice and helpful and worked to smooth over the bumps.  After some conflicting information as to whether we could order meals or not, we tried several of the dinner offerings.  The fried chicken sandwich was crisp and juicy, and the burger was well cooked.  The duck fat potatoes were rich and enjoyed by the whole table.  A steak that was ordered medium came out on the bluer side of rare, but it was replaced with a perfectly cooked halibut.
Overall, I think this place is fun, fresh, and is going to be a new go-to place in Southie.  There was quite a line when we left around 9, and if you want to eat, reservations are a must.
42.360082 -71.058880
Boston, MA, USA

This entry was posted in MMHO and tagged Blue Point Brewery, Coppersmith, MMHO.