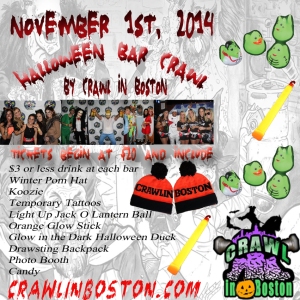 It’s getting chilly out there. It’s Friday and I know that many of you are prepping for the big Harpoon Octoberfest. I’m dedicating my weekend to finding a half decent Halloween costume idea. Just about 4 short weeks to go until the biggest Halloween event in Boston.

Join Crawl in Boston for the Cambridge 5k Yulefest! Join us on December 14th for a 5k race through Cambridge, followed by an after party sponsored by Night Shift Brewing, Slumbrew and more. The race is $38, which includes entrance for the after party (with beer and food!). Sign up and select team Crawl in Boston. See you at the race!