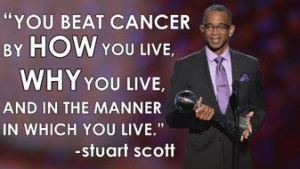 I was very sad (shocked) to learn this morning that Stuart Scott passed away from cancer at 49 years young. The combination of Stuart and Rich Eisen really changed the way I viewed sports.

I specifically remember being at Daytona Beach one year and watching Stuart and Rich riff back and forth while doing the highlights. It was spectacular. I can’t count how many catch phrases I used the rest of that week, month, year(s).

R.I.P. as you will be missed by millions.

“As cool as the other side of the pillow”

The Baltimore Ravens return to town on Saturday to face the Patriots in the second round of the playoffs. I must admit that I felt a lot better about this match up 24 hours ago. But Joe Flacco having a 10 – 4 playoff record (which I believe he’s 7 – 4 on the road) and Terrell Suggs being a lot better than I remember (he was defensive player of the year just a few short years ago) make me nervous.

Congrats to Jon Jones for defending his UFC title. I don’t follow UFC so much but he’s the brother of Chandler Jones so I do try to keep tabs when he does fight.

The NYE Pictures from Casino Royale are now posted. Almost 200 total. You can check them out here.

It’s 2015. Thrillist came out with a Best event in every state. Get after it!