It’s Halloween Crawl week. We still have a handful of wristband only tickets available. It’s getting close to

where the number of bars we have the capacity won’t work out. Worked out better contract this year so we will have less people without wristbands able to get in without paying cover. 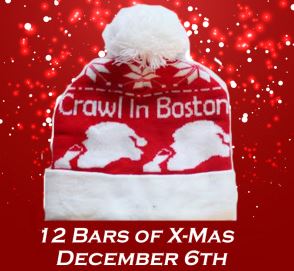 TICKETS NOW ON SALE We’re working on one more big surprise however our vendor isn’t giving us info as quickly as we’d like.

Join Crawl in Boston for the Cambridge 5k Yulefest! Join us on December 14th for a 5k race through Cambridge, followed by an after party sponsored by Night Shift Brewing, Slumbrew and more. The race is $38, which includes entrance for the after party (with beer and food!). Sign up and select team Crawl in Boston. See you at the race!